Skip to main content
“The staff were very helpful. They showed me the risks and hazards in my home that I was not aware of.”
Mrs FA

The quotes in this potted history are taken from "The Story of Bishop Creighton House" written in 1948 by its first Warden, Catherine Wickham.

Bishop Creighton House Settlement was founded in memory of Bishop Mandell Creighton. Before becoming Bishop of London, he was Canon of Worcester Cathedral and Bishop of Peterborough. He was also a brilliant historical scholar, holding the Chair of Ecclesiastical History at Cambridge from 1884-91, and receiving many honorary doctorates in the UK and overseas. He was a prolific historical author, and for some years edited The English Historical Review.

Dr Creighton became Bishop of London in 1897, and moved with his wife Louise to the Bishop's residence at Fulham Palace. Fulham had been an agricultural district of orchards and market gardens, but gradually the gardens and private estates were bought up by speculative builders. Older houses became insanitary and over-crowded. The Bishop and Mrs Creighton saw this happening round the oasis of Fulham Palace. They realised that the new population was experiencing many of the distresses of East London, with no compensating religious or civic traditions, and the idea of a Settlement came to them.

Bishop Creighton died in 1901, and was buried in St Paul's Cathedral. His monument - by Thorneycroft - stands in the south aisle of the choir.

In 1907 the Bishop's widow, Louise Creighton, found a site for a Settlement in his memory. An appeal was launched and the three houses in Lillie Road were bought. Louise Creighton outlined how the work should be started:

"The Settlement was to serve both Fulham and Hammersmith, the area being pictured not as two boroughs [as in fact they were] but as a network of parishes crying out for workers - many needing new life and ideas.

The Settlement house was to hold eight residents with a domestic staff of two. They were to be either fully experienced or prepared to take all available training, so as to be something like leaven in the neighbourhood. And they were to be the spearhead of a much larger number of part-time volunteers."

During WW1 Settlement work was affected in a number of ways

"The task of persuading parents to have children's teeth 'tampered with' was eased when they could be invited to the house well known for such pleasant things as play centres and country holidays."

"The after-care of boys and girls entering industry at the sadly early age of fourteen was a particularly anxious undertaking, every effort being made to link them up with continued education. It was therefore a great delight to open up an Apprenticeship and Skilled Employment Office at the Settlement in 1926"

In about 1923 "there was increasing anxiety about moral dangers for young people and assaults on children. While backing the demand for women police, we found ourselves taking the lead in the local organising of "vigilance" work and patrolling. Some results were attained in getting improved lighting, closing a drinking club and educating public opinion. But all sorts of difficulties were encountered and that campaign ended after about three years."

"For a long time our workers had had particular heart-searchings over insanitary and often overcrowded housing conditions in the borough, and the unwillingness of the authorities to acknowledge or deal with them. A campaign became practical politics... and a professional survey was set on foot. The consequent report was of explosive material which threatened to ruin our relationship with the Borough Council. The Housing Association was founded to keep the Authorities up to the mark and the Fulham Housing Improvement Society to point the way in both reconditioning and building."

"The immediate effect on the Settlement of WWII can be summed up in the word "Evacuation". Apart from helping in the mass movement of children and mothers, it meant the closing down of all our clinics and play centres as well as of schools."

"The Settlement was besieged by every kind of problem - from the old and the invalid, from husbands and working lads with no-one left to cook for them, people thrown temporarily out of work, complaints about evacuees from their billets and vice-versa. In spite of the generally accepted advice not to assemble people together, the clubs welcomed crowds of young people bewildered by the black-out, and in a general state of nerves."

For up to date information on BCH today, please go to the What We Do section. 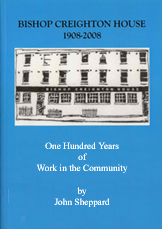